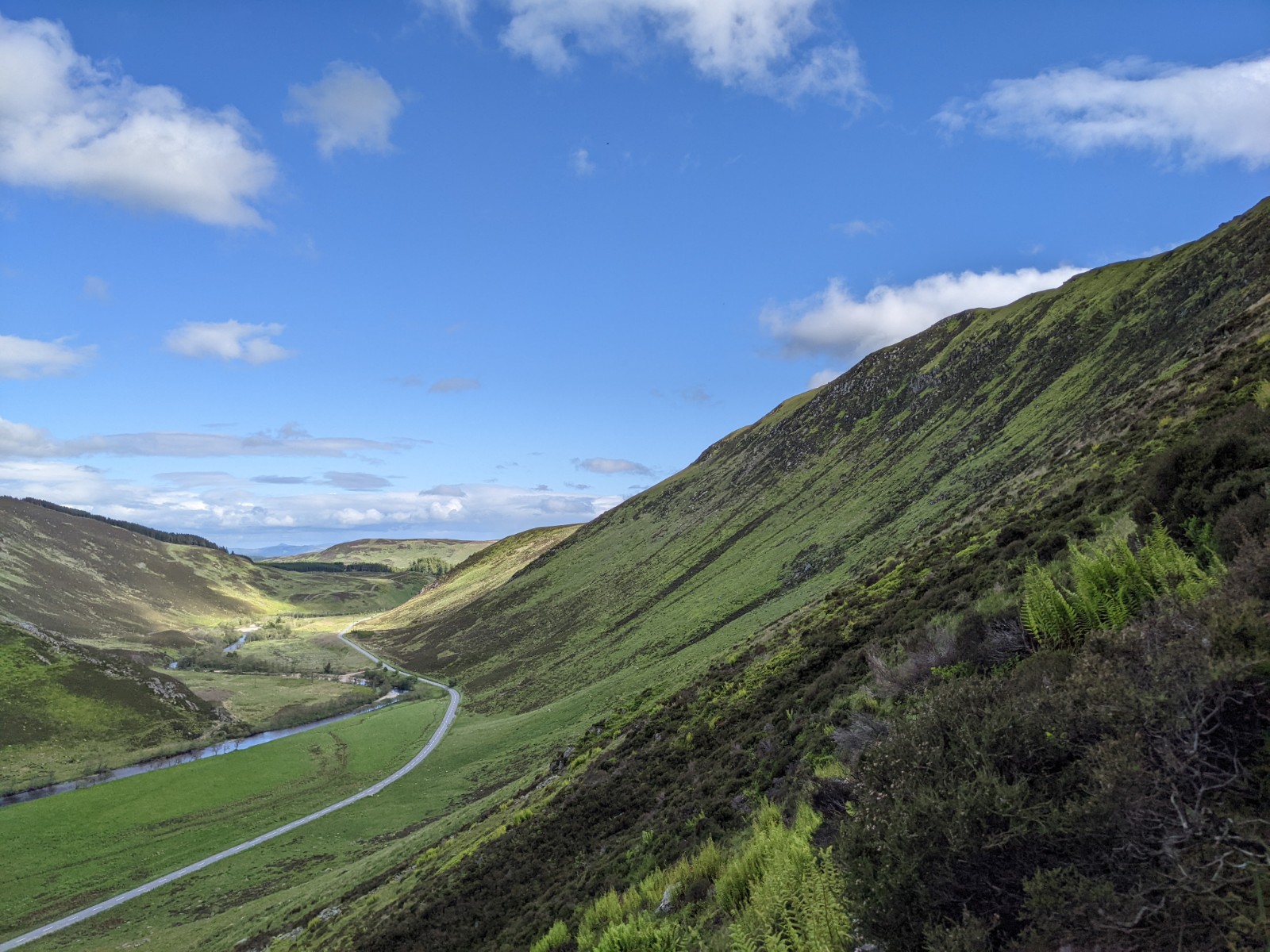 The Sma’ Glen in Perthshire may be only two miles long, but it is big on stories. Its slopes and riverbed are lore-laden, telling of the legendary Fianna and the bones of the great bard, Ossian. I have come to think of it as something like a miniature Glencoe, albeit one much closer to the Central Belt at just twelve miles west of Perth. And yet, this proximity to Scotland’s major centres has not given the Sma’ Glen away – it remains very much a place that relatively few know of. These are just a few of its many tales.

The shadow of Rome

Let’s start at the southern edge of the Sma’ Glen. On a hillock near a modern road bridge once stood a Roman watchtower, part of the extensive line of defences monitoring the Highland passes. Nothing is now left of it except a slightly raised circular spot of heather-covered ground, but the fact that any trace at all is visible after 2,000 years is extraordinary. From the position where the watchtower stood, the hills of the Sma’ Glen and Strathbraan appear massive, their stone shoulders leaning so tightly over the floor of the glen that, were they to lean a little forward, it seems they could form a mountainous canopy.

The remnants of Rome were woven into later lore, as seen at the nearby Roman fort of Ardoch. By the Middle Ages the area’s Gaelic-speaking peoples attributed the slopes and ditches of the fort to the mighty Fianna, a race of heroic Irish giants led by Fionn mac Cumhaill (Finn MacCool). Ardoch was their camp, and one story tells of their downfall. One of their number, Garaidh, was left behind with the women while the rest went hunting, though the story notes that the women of the Fianna were no less formidable. Knowing how proud and vain Garaidh was of his long, golden hair, they waited until Garaidh fell asleep in the grass outside the fort.

Seeing their chance to teach him humility, they snuck out and silently coiled strands of his hair around large wooden pegs which they drove into the earth around him. Assembled on the fort’s wall with the gate shut, they all shouted. Garaidh leapt to his feet, tearing out huge clumps of his hair. Mad with pain, he piled timbers around the fort, paying no heed to the increasingly urgent protests of those inside. He set it all aflame, and none survived. Seeing smoke rising to the south, the Fianna returned to the scene of the massacre and slew Garaidh where he stood. This, it is said, is why the Fianna are no more, as there were no children born to them after Garaidh’s crime.

Within the Sma’ Glen itself is a large, upright stone not ten paces from the tarmac road. It is not a standing stone, but a test of strength. Called ‘The Saddlin’ Mare’ or ‘Saddlin’ the Mare’, the top of the stone, which stands about six feet high, is smoothed to a rounded, tapered point. Three smaller stones lay at its base – the first the size of a fist, the second weighing about 40 pounds, and the third clocking in at over 200 pounds. For two centuries at least, local men have taken up the challenge of trying to lift the heaviest stone, the ‘Saddle’, onto the top of the upright stone, the ‘Mare’. Such tests of strength were once commonplace throughout the Highlands, but this is one of very few known examples which survive, and are used, to this day. I managed the 40-pounder, but could barely get the big one to budge!

One of General Wade’s famous military roads ran from Crieff, once the site of a major cattle market that saw drovers descend upon the town from the furthest reaches of the Highlands, through the Sma’ Glen on to Aberfeldy and Kenmore on the banks of Loch Tay. Made of layers of rubble and compacted gravel, Wade’s Roads cut a clear swathe across the landscape, much like the Roman roads did in the south of Scotland over 1,500 years before. Very near Wade’s Road and not far north from The Saddlin’ Mare is another storied stone, Clach Ossian – ‘Ossian’s Stone’.

Ossian was the warrior-poet among the Fianna. The story goes that Wade’s road builders dislodged Clach Ossian to move it out of their way. Underneath it they discovered a vessel, Roman in appearance, containing burnt bones thought to be the remains of Ossian himself. Wade left a guardsman to watch over the stone and vessel, while the rest of the roadmen returned to their camp at Ardoch. In the night, the guardsman saw trails of fire descend from the hills and heard pipes howling laments through the air. These were the locals who had witnessed the desecration of their hallowed bard’s burial place. They took the vessel and buried it in a secret spot upon Dùn Mor, the site of an ancient hillfort attributed to the Fianna which towers over the Sma’ Glen. There the bones of Ossian allegedly remain to this day.

Lessons from the Sma’ Glen

In his definitive 1914 novel The New Road, the Scottish writer Neil Munro mused on the passing of time and legacy. Set in 1733 during the period between Jacobite risings when General Wade’s roadbuilding programme into the Highlands was well underway, the character Ninian Campbell observed: “And yet – and yet, this New Road will someday be the Old Road, too.”

These words proved true. Today, Wade’s Road through the Sma’ Glen is little more than an earthen impression, often sodden underfoot with the stonework cleared away, leaving shallow pools and faint tracks in their place. It took less than 300 years for Wade’s ‘New Road’ to become the ‘Old Road’ – indeed, a modern tarmac road runs alongside it. Before too long, in the grand scheme of things at least, it, too, will become the ‘Old Road’. Who is to say what shape the next ‘New Road’ will take? It’s all part of how history, and legends, take shape.