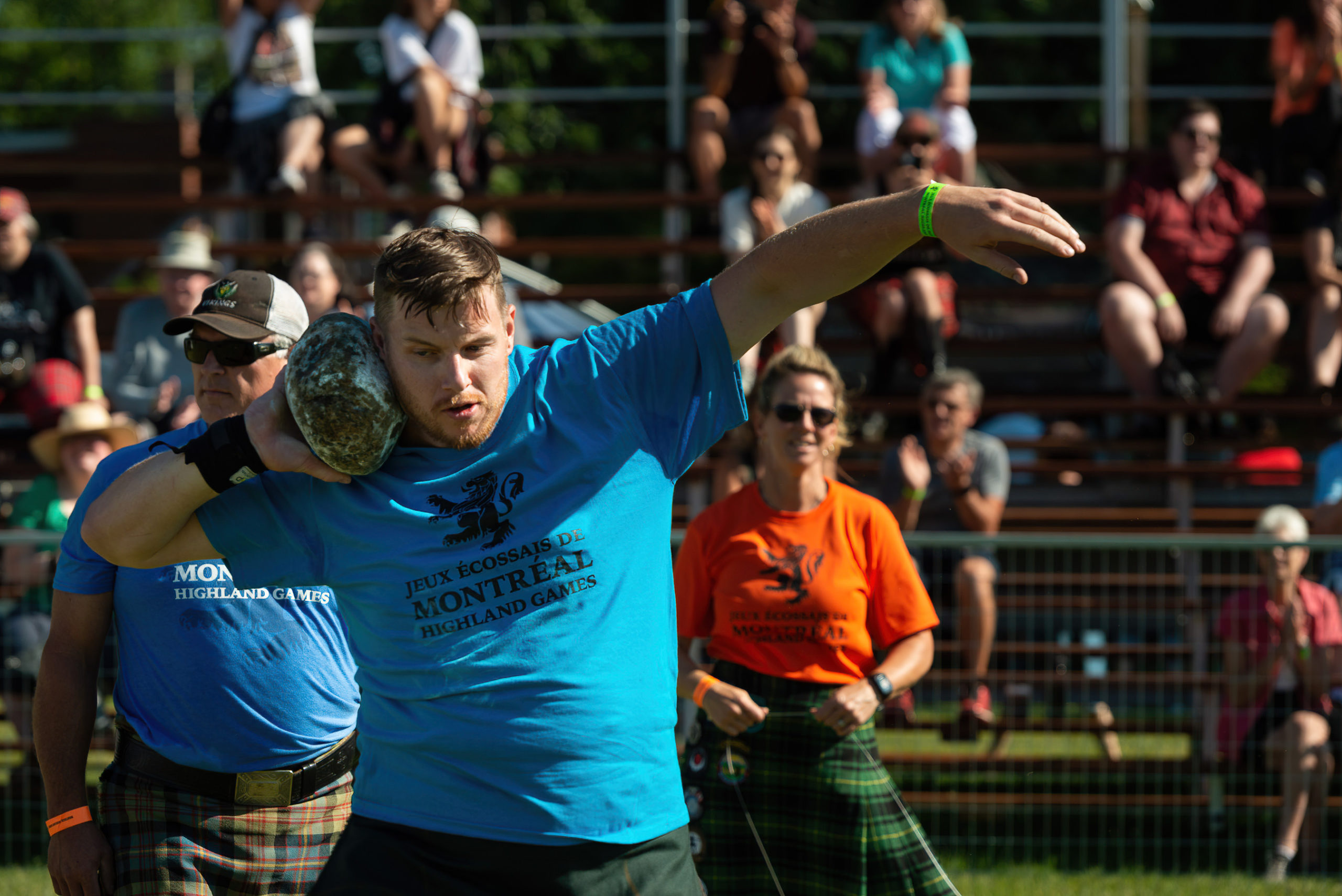 It was a spectacular return for the Montréal Highland Games on July 31 at the Douglas Hospital Grounds in Verdun; co-sponsored by the St. Andrew’s Society of Montréal and Pembroke Management and supported by the City of Montréal. Close to seven thousand people celebrated Scottish culture on a gorgeous summer day.

From babes in strollers, to teens in kilts, families in matching tartan, to the elderly with canes; Montrealer’s of all ethnicities revelled in the sound of bagpipes, the taste of haggis, and the thrill of seeing the caber toss. Crowds cheered for the Highland heavy athletes who competed in the main field. The winner of the Canadian Scottish Athletic Federation Open Championship title, Lorne Colthart, hailed from Blair Atholl, Scotland. Highland dancers competed for coveted trophies.

President of the St. Andrew’s Society of Montréal, Guthrie Stewart, congratulated each winner and commented that it was the highlight of his day at the Games; “Connecting with our youth is so important, they are our future!” Medieval knights battled in the ring while little ones enjoyed the bouncy castles and tried their hand at tossing “wee cabers” at the National Bank Family Village. Crowds cheered in the lower field as teams pulled together for a cause in the Tug-of-War. The Black Watch Royal Highland Regiment may have won the cup, but the real winner was the Douglas Foundation. Funds raised from the competition will go to this largest research centre in mental health in Québec —to continue its ground-breaking mental health and neuroscience research, to offer first-class care to individuals living with mental illness, and to raise awareness of mental health issues.

Visitors sought out their “long lost families” in the Scotties Celtic Mile and congratulated Clan Fraser for winning Clan of the Day and Jacques McNicoll for being awarded Chieftain of the Day. They led the Clan Parade throughout the grounds in the afternoon. Crowds lined the ring of the main field to watch massed bands perform their intricate marches during the opening and closing ceremonies. Familiar tunes such as Scotland the Brave and Auld Lang Syne were performed by winning bands Ottawa Caledonian Pipe Band, Glengarry Pipe Band Grade 4, MacMillan Birtles Pipe Band, and the MacMillan Pipe Band. Winners of the Drum Major competition were Patrick Dowd (professional) and Robert Labreche (amateur). The Ceilidh Tent never skipped a beat as Mariner’s Curse and Hadrian’s Wall, along with Guest of Honour Michael Yellowlees performed to an appreciative audience.

As the day drew to a close and guests gathered for last call, President of the Games, Scott Mackenzie, raised a toast, “To the more than 150 volunteers who make this day happen, to our vendors, our concessionaires, our athletes, dancers and musicians, we wouldn’t be here without you! Slainté! Thank-you! Merci! Gracias!”

There may be bigger Games, but none can match the “joie de vivre” found in Montréal. See you in 2023!

Each year the Montreal Highland Games brings together Montrealers of all backgrounds to celebrate Scottish sport, music and culture. For more information see: www.montrealhighlandgames.com