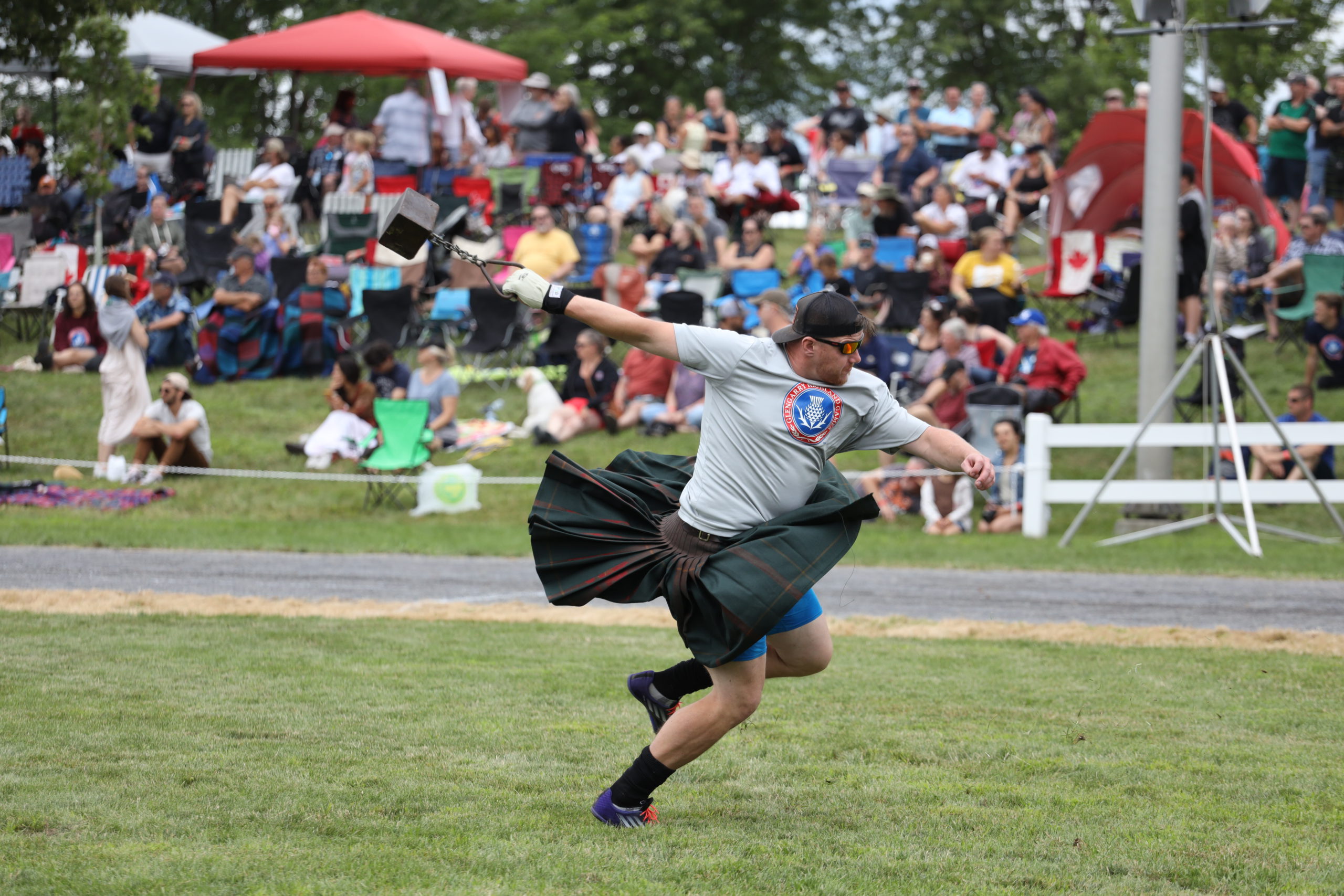 The Glengarry Highland Games 73rd edition was in one word, “fabulous”. The Games Directors and Committee members wore huge smiles as the thousands of people made their return to the Games on July 29 and 30.The Games were back and in a big way with special memories made everywhere from families reconnecting after two years, to young highland dancers competing for the first time under the anxious eyes of parents, to athletes competing at the top of their form along with first time visitors in awe of the sights and sounds of the Games. The crowds sold out the souvenir booth by noon on Saturday as everyone rushed to don the famous Games t-shirt. Kilt sellers were doing a booming business while food vendors had line-ups throughout the day.

The competition and music venues were filled with enthusiastic audiences and the mounds surrounding the infield were jammed with people spread out watching the many events displayed before them. The numbers aren’t in for attendance yet, but the informal measure of how much parking was left indicates that Saturday was a near record crowd. The North American Pipe Band Championship™ was claimed by the 78th Fraser Highlanders of Toronto defeating the 78th  Highlanders (Halifax Citadel). Winners of the different competitions have been posted on our Games website where fans can check out how well their favourites did.

There was a special event on Saturday afternoon on the infield before the Challenge Caber when a surprised Rod MacLeod, past Director of Heavy Events at the Games, was inducted into the Canadian Scottish Athletic Federation’s Hall of Fame. Rod has been an integral part of the Games and the heavy events community for over fifty years. According to Rod, it all started as a lark. At the end of the caber toss in the early Games, local fellows were invited to come onto the field and try their hand at tossing the caber. Rod and a friend took up the challenge and as Rod says, “The rest is history.” Rod soon became a strong competitor including a World Championship in the caber toss in 1973. In the 80s, Rod, along with other keen heavy event competitors joined up to form the famous club, the Cabers of Glengarry, who trained together and competed very successfully in heavy events across America.

The Club’s success led to a reputation for winning by the athletes from Glengarry. The Club was inducted into the Glengarry Sports Hall of Fame in 2015. Rod has now retired as Director of Heavy Events, but he is still very much involved as a co-chair of the events and can be found at every Games right in the thick of things. He also hasn’t lost his touch with the caber. When CTV was taping segments for their AM show, Rod demonstrated that he could still toss a 12 o’clock with the caber, not once, but three times. The Games are proud and thrilled that Rod has received this prestigious award. As they say, it couldn’t happen to a more deserving person. Rod is synonymous with heavy events at the Games and obviously with his induction into the Hall of Fame this feeling is widely shared. Congratulations, Rod, well done!