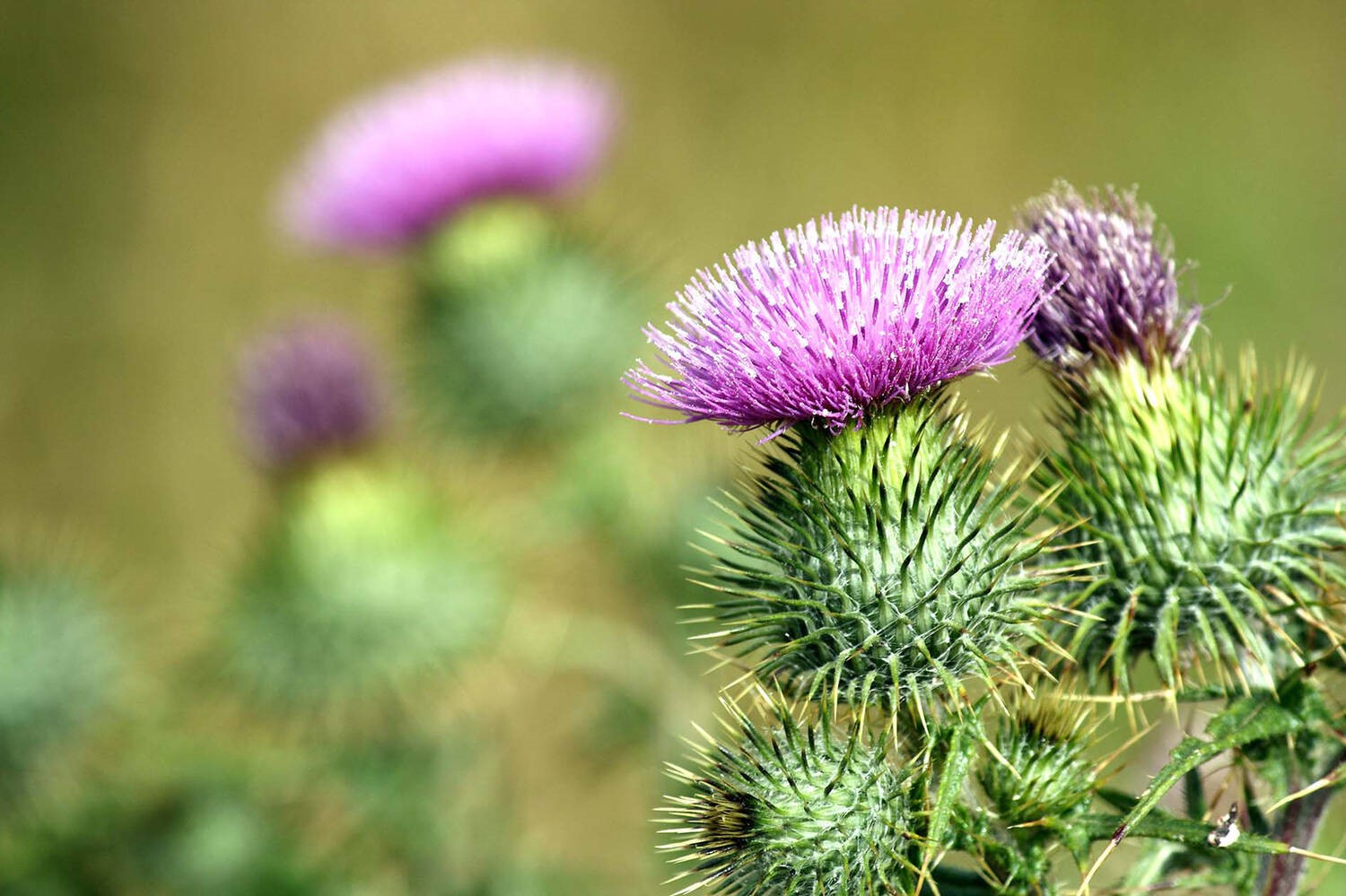 By: Rheanna-Marie Hall,
The National Trust for Scotland (NTS)

The thistle is the flower of Scotland and one of its most recognisable symbols. Since King Alexander III, it has been Scotland’s national emblem. No-one is truly sure of how the thistle came to be Scotland’s national flower. A well-known story though attributes the thistle being chosen as the emblem of Scotland to the Battle of Largs (a coastal town in Ayrshire) in the 13th century. A Norse army journeyed to Scotland, intent on conquering the land.

The legend has it that they left their ships under cover of night, and were planning to ambush the sleeping Scottish Clansmen. In order to be as quiet as possible, the Norsemen had removed their shoes. However as they crept across the countryside, one of them stepped onto a thorny thistle. His cry of pain roused the Scots, and the warriors rose up and defeated the invaders.

Silver coins in Scotland and later Britain have long featured a thistle, and the first coins to do so were as early as 1474, issued by King James III in Scotland. The most recent design to feature the thistle plant was the British 5p coin (which stopped being minted in 2008), which was impressed with ‘The Badge of Scotland, a thistle royally crowned’. In 1687 King James VII and II founded the Order of the Thistle. Its heraldic emblem was, of course, the thistle. Its full title is the Most Ancient and Most Noble Order of the Thistle, and it is an order of chivalry, the highest honour Scotland can bestow on an individual. The motto of the Order, Nemo me impune lacessit, ‘No one provokes me with impunity’, pairs well with the prickly thistle which cannot be picked without difficulty.

The symbol of the thistle can also be seen in combination with other national flowers and symbols. Below is a flag gifted to Falkland Palace in 1950, to mark the 300-year history of the Scots Guards. The emblem represents the Crown and the rank of Colonel, showing the Scottish thistle, English rose and Irish shamrock with the words Unita Fortior, ‘stronger in unity’. The military colours were presented to George VI when he was Colonel-in-Chief of the Scots Guards from 1932–7.

Thistles can be found right across Scotland, from the Lowlands to the Highlands, and even on the islands! There are a number of different types which grow in the UK, and a variety of thistles can be found in the wild around Scotland, the most common being the spear thistle, the creeping thistle, and the marsh thistle. It is the native spear thistle, Cirsium vulgare, which is thought to have been used as the national emblem. They are abundant in Scotland, and the imagery on coins, flags and other symbols through history closely matches this particular variety.

There is another type of thistle known as the ‘Scotch thistle’ or cotton thistle, Onopordum acanthium, but this is non-native. It was likely introduced from Europe sometime before the 16th century, and is most abundant in the United States of America and Australia. Different varieties of thistle can be seen at NTS countryside and garden properties across Scotland, such as Mar Lodge Estate National Nature Reserve.

At Mar Lodge Estate, where over 600 plant species have been recorded, since 2018 a rare plant conservation project has been underway for two species which are at risk of extinction in Scotland. One of these is the alpine blue sow thistle (Cicerbita alpina). At Mar Lodge it can be seen growing beside the more traditional-looking varieties of thistle, here a melancholy thistle, Cirsium heterophyllum.

The thistle is now well ingrained into the cultural identity of Scotland, and you can find it everywhere. Amongst other things, it is the logo of Scottish Rugby, adorns the crest of Scotland’s national football team, is a core component of the Police Scotland logo, and is a popular choice for any number of Scottish businesses. For visitors to Scotland, a keepsake decorated with a thistle flower is often a must-have!

Thistle plant extract can also be found in beauty products, particularly soaps and face creams, as in recent years it has been found to have anti-inflammatory properties and be a beneficial ingredient in skincare.

Text and images courtesy of the National Trust for Scotland. For more information on the Trust or to help them protect Scotland’s heritage see: www.nts.org.uk