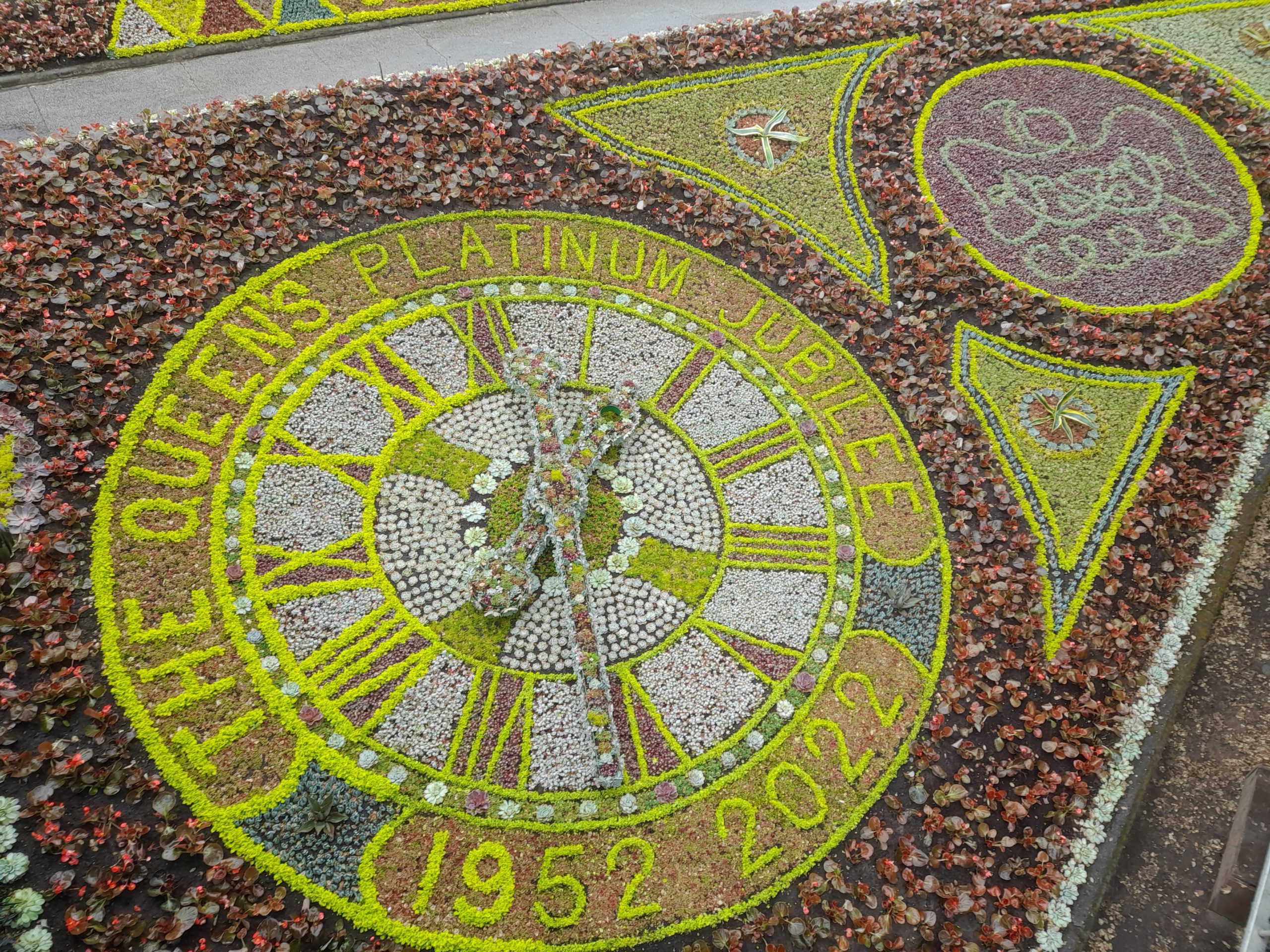 Work has finished to complete this year’s design on the world’s oldest Floral Clock in Edinburgh’s West Princes Street Gardens. For 2022, the hugely popular landmark celebrates Her Majesty The Queen’s Platinum Jubilee.

A team of five gardeners took just four weeks to plant over 35,000 flowers and plants used to create the clock, which will be in bloom until October. There are nine different plants included in this year’s design such as Agaves, Echeveria, Sedums, Pyrethrum, Crassula, Kleenia, Antenaria, Geraniums and Begonias. To be ready for the recent Jubilee celebrations, the team at Inch Nursery brought the plants on earlier than previous years and the gardeners worked quickly to complete this in time. They will be in full bloom throughout the summer.  This year also marks 70 years since a cuckoo clock was added which still chimes every 15 minutes.

The oldest of its kind in the world

Edinburgh’s Lord Provost Robert Aldridge said: “I am delighted to once again see the city’s beautiful floral clock completed, and in perfect time for the Jubilee weekend. Each year the iconic clock marks special occasions and events in the heart of the Capital and this year it is a unique tribute coinciding with celebrations taking place around the country as the nation marks the Queen’s 70-year reign. My thanks and congratulations to the dedicated and creative parks team who have put together the design that I’m sure will be enjoyed by everyone who passes by it this summer.”

The Floral Clock was first created in 1903 by then Edinburgh Parks Superintendent, John McHattie, and is the oldest of its kind in the world. It initially operated with just an hour hand, with a minute hand added in 1904, followed by a cuckoo clock in 1952. Until 1972 the clock was operated mechanically and had to be wound daily.

Since 1946 it has been designed in honour of various organisations and individuals, including the Girl Guides Association, Robert Louis Stevenson and The Queen, for her Golden Jubilee. In the clock’s centenary year in 2003 it won a Gold Medal at the RHS Chelsea Flower Show.

-The clock was created in 1903 and is the oldest floral clock in the world.

-It is housed in the plinth of the Allan Ramsay Monument at the north-east corner of West Princes Street Gardens.

-Planting begins in May each year.

-In 1946 the clock began celebrating a different event or anniversary each year.

-In 1952 a cuckoo clock was added and still chimes every 15 minutes.

-The clock began being operated electrically for the first time in 1973.

-The clock won a Gold Medal at the RHS Chelsea Flower Show in 2003.

-Weight of large hand (when filled with plants): 80lbs.

Weight of small hand (when filled with plants): 50lbs

Floral clocks are now distributed worldwide and many were made in Edinburgh, where the idea originated.

They can be found in India, Australia, New Zealand, South Africa, South America, United States of America, Canada and many other European countries.