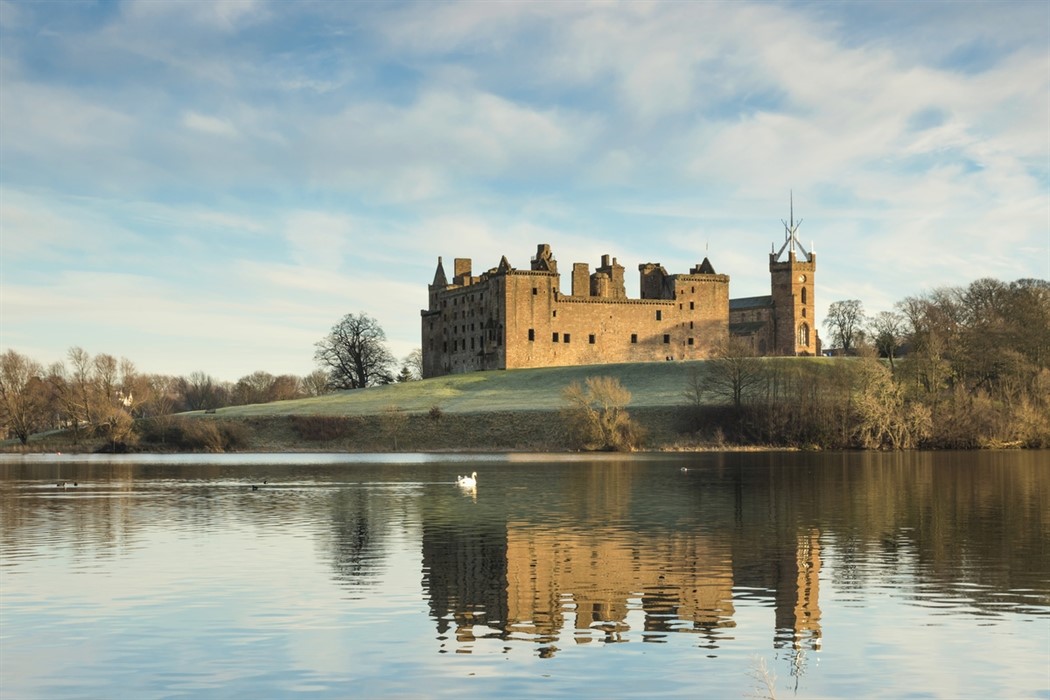 James IV is usually remembered as the tragic king who not only lost the Battle of Flodden in 1513, but also died on the field. In fact, he was a very much more complex and interesting figure who influenced both the world of the church and the world of the arts. One place where these interests came together was Linlithgow Palace.

Linlithgow figures prominently in the Flodden story; it was in St Michael’s Kirk (adjacent to the Palace and also surviving today) that, before Flodden, James reportedly saw a blue-gowned apparition that warned him not to march with his army to England. Well, we can take that, as all such stories, with a hefty pinch of salt but if James IV were to see a ghost when in church, he’d be likely to see it in St Michael’s for he regularly went to Linlithgow. He commissioned a number of developments and enhancements to the palace. It’s been called ‘James IV’s Pleasure Palace’, but it was also a place of prayer with its own Chapel Royal – as if St Michael’s Kirk wasn’t grand enough.

James IV had one especially distinguishable characteristic; he travelled about his kingdom a great deal, being seen in public, carrying out engagements and making agreements with local power bases. This was a probably a deliberate contrast to his late father, James III (a lot of Stewarts were called James) who had been criticised for rarely venturing outside Edinburgh. James, by contrast, progressed, in traditional royal fashion, between his various palaces including Edinburgh, Linlithgow, Stirling Castle and Falkland.

James encouraged the arts. He ordered the completion of the Chapel Royal and the Great Hall at Stirling Castle (both of which we can still appreciate today) and poets like William Dunbar and Gavin Douglas were encouraged to flourish. James became the patron of King’s College, Aberdeen in 1505 and in 1507 licensed Scotland’s first printing press. Scottish sacred music also began to get noticed, Robert Carver being its key figure.

Carver was an Augustinian canon at Scone Abbey near Perth, but also a composer of church music. He is most notable, however, for compiling what is now known as the Carver Choirbook, a collection of polyphonic sacred music, which included some of his own compositions. The National Library of Scotland suggests that the Choirbook was put together at some point between 1513 and 1520 (ie, after James IV’s death), possibly for use in the chapel at Scone Abbey, or the Chapel Royal at Stirling Castle. However, it’s just possible that the collection was compiled a little earlier for use in the Chapel Royal at Linlithgow Palace in the presence of James IV.

James IV was devoted to the cult of St Catherine and was known to celebrate her feast day (November 25) at Linlithgow. His alleged spectral warning about Flodden came in the St Catherine’s Aisle of St Michael’s Kirk and he paid fifteen visits to a healing well at Liberton in Edinburgh that was dedicated to St Catherine. The well still survives, in the grounds of a restaurant, and is sometimes known as ‘the Oily Well’ because of the oil that naturally appears on the water from local shale deposits. It may be significant, then, that the Carver Choirbook includes a number of works referencing St Catherine.

The sound of live Renaissance worship

Two research projects, involving Edinburgh University and funded by the Arts and Humanities Research Council – Space, Place, Sound and Memory and Hearing Historic Scotland – have been investigating the appearance, layout and acoustic properties of the Linlithgow Chapel Royal during James IV’s time. The aim is to enable people today to experience what the sound of live Renaissance worship was like. Linlithgow Palace is now mostly ruinous (though still impressive) and the Chapel Royal is a bare, roofless, windowless space. The researchers surveyed the existing chapel using laser technology and studied the likely furnishings and layout of the space in James IV’s time. The aim was to make recordings and to develop an app that would allow listeners to experience the music as it might have sounded in Linlithgow’s Chapel Royal in its heyday.

Informed by the Hearing Historic Scotland project, a CD was recorded and issued, composed of selections from the Carver Choirbook (although none of the chosen music is by Carver himself) including some pieces dedicated to St Catherine. The music was performed by the Binchois Consort, conducted by Andrew Kirkman. James VI is known to have celebrated Easter at Linlithgow in 1512, so the selections are designed to be a possible order of service for that occasion, performed in the presence of a king who reverenced St Catherine. Using the app, listeners can compare how the music would sound in the recreated chapel of 1512, with the sound in today’s cold bare space.

Renaissance sacred choral music may not be your cup of tea, but these studies add to our understanding of James IV. It’s remarkable how much of the world that he knew can still be visited today. The sacred well at Liberton is freely accessible and so are James’ royal palaces, although Stirling, especially, was much remodelled later by his son James V. Even the burial place of his parents, James III and Margaret of Denmark, can be visited at the site of Cambuskenneth Abbey, a quiet spot near Stirling.

Much of what we know about James concerns his piety; the chapels, the music, the sacred sites. There is also his Book of Hours, a spectacular illuminated prayer book created probably in Ghent, Belgium, and now held in the Austrian National Library in Vienna. And yet, in the strange world of the 15th and 16th centuries, he was able to combine his religiosity with a liberal love-life. He had several children by a string of mistresses.

James IV was a fascinating if not a particularly admirable man. Recent research now enables us to appreciate even the music he heard during his devotions. He was more than just the king who received a ghostly warning about an impending battle, ignored the warning, and rode out to his death.

You can see a sample page of the Carver Choirbook at the National Library of Scotland’s website: https://digital.nls.uk/scotlandspages/timeline/15032.html

Details of the Hearing Historic Scotland and Space, Place, Sound and Memory research can be found at: https://www.eca.ed.ac.uk/research/space-place-sound-and-memory