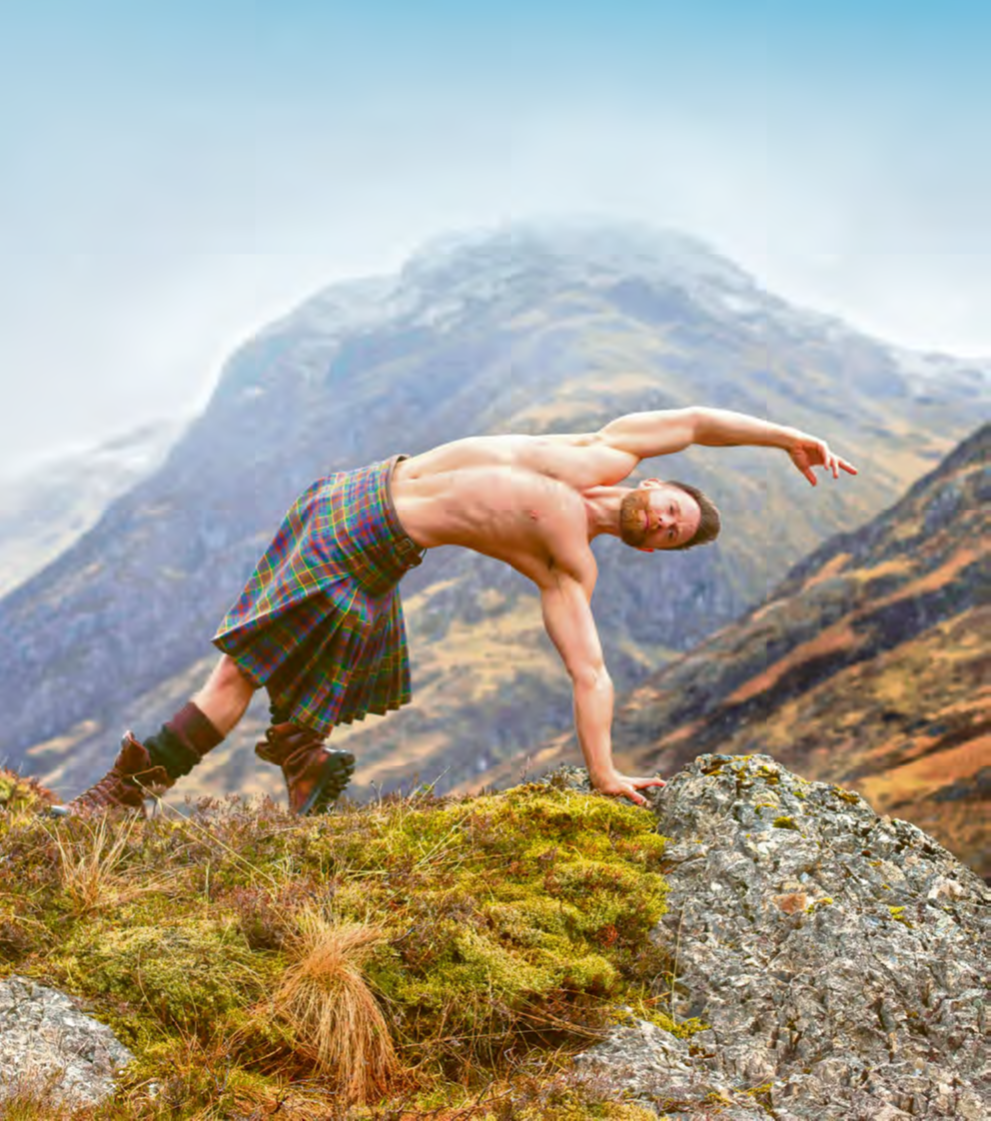 Viral Scottish yoga star Finlay Wilson is back with his new book Wild Kilted Yoga: Flow and Feel Free, get ready for more tartan, more dramatic scenery and more tips and tricks to make your yoga practice extra special. Finlay took time to speak to the Scottish Banner on his love of yoga, his rescue dog Amaloh, tartan and of course Scotland.

Finlay you have fused Scotland’s incredible scenery, the iconic kilt and the ancient, but non-Scottish, practice of yoga to become a viral Scottish yoga star a few years back. Since then, you have helped sell yoga, kilts and Scotland to the world. How has your life changed since 2017 and are you still surprised how merging these elements has been enjoyed by millions of people across the world?

FW: It constantly surprises me that every week new people engage with it. I get messages and comments from all over, some first timers to yoga, but most that are big fans of Scotland. If it gets more people thinking about yoga and a practice for themselves, then great!

You have said your dog Amaloh is the reason you created Kilted Yoga and that you rescued Amaloh from Sri Lanka with a yoga strap as a collar. Can you tell us more and how has having Amaloh in your life changed you?

FW: If it weren’t for the on-the-spot decision to rescue him, the chain of events would have meant Kilted Yoga never happened! Once Amaloh was over here, I made a video about him that went viral. In the small period of time afterwards people waited for the “what’s next” and were receptive to Kilted Yoga. His three million views were knocked out of the park within 24 hours! On a more serious and less digital note, I had just gone through an awful divorce and having him suddenly in my life gave shape to my days, keeping me from sinking too deeply. He also really enjoys being around when I am doing Yoga, so he was like a familiar that encouraged me to do even that.

As the world changed so drastically last year with many facing isolation and depression. How do you find yoga has helped you during the pandemic and how have you had to adapt your business during a Covid world?

FW: Yoga is my daily practice. The pandemic added a lot more pressure but what it did was move me outside. I found to deal with the challenges mentally, I had to augment my practice by getting outside more and became an avid cyclist, gardener and walker. From a business point of view, teaching online wasn’t new to me, so we were able to transition straight away to online classes without missing a beat. While practicing online isn’t the same as being in person, it was a means to and end that kept our community together and in a routine for the 18 months. Our staff all stayed on full time and our audience grew to span the world, that was a very unexpected bonus!

You do a lot of community outreach from your Dundee based studio and help children, young adults and families and recently became an Ambassador for the Prince’s Foundation, can you tell us more?

FW: I sure can. The studio, Heart Space, just celebrated 10 years since I opened it and now that we are back into the swing of things (albeit with physical distancing still in place) we have a full schedule of classes for families that are free. So far, we offer pregnancy yoga, parent and baby yoga, parent and baby barre, kids yoga, kids aerial yoga, and kids aerial silks and a class called Yoga for Every Body. All of our other classes help fund this and the work we do in the community. With community centres and groups still working out this new environment, we are hoping to keep developing and reforging connections we had 20 months ago.

With this focus and skillset, I was approached by The Prince’s Foundation to be an ambassador for the incredible work that the foundation does around mental health, wellbeing, and education. Without it being too much of a theme, as we come out of the pandemic, my role will become clearer as we find new ways to work with each other.

In 2017 you released the bestselling book Kilted Yoga: Yoga Laid Bare which introduced many to yoga and also some spectacular Scottish scenery.  Now you are releasing Wild Kilted Yoga: Flow and Feel Free. Can you tell us more about the new book, working with your twin brother and how making this book you were able to visit special places in Scotland from your childhood?

FW: Not only was it amazing to get out when restrictions lifted, I also hadn’t spent any meaningful time with my twin brother since the start of the pandemic. So, to be able to go out with a project and a plan felt incredible. Now, the weather had other ideas and we were hit with blizzards as soon as we got to Glen Coe in May, hail, gale force winds and torrential rain. We had to move some of our locations around and for each sequence (fire, water, earth, and air) we shot in two different locations for each as we navigated the weather. Only one of the locations, air, was new to me as we trekked along single track roads for hours to get to Sanna Beach. It looks more like Caribbean waters than what you would associate with Scotland!

Alastair has taken almost all of the images you see on my pages, we do a calendar every year and I wanted to work with someone that knows me very well, understands the poses and when I am fully in them, but also to celebrate that he is as much an essential part of kilted yoga as the guy doing the yoga!

The book follows on from book one which set the foundations of the practice I teach and moves into four very different sequences that build on these foundations. Each sequence has a different energetic with flowing movements for water and strong holds for fire. There is also a bonus chapter in there for two people practicing together, just like book one.

In 2018 you created the Kilted Yoga tartan which gives a nod to the mystical Scottish wolf. Can you tell how important it is for you incorporate kilts in your work and to also champion the art of kiltmaking and Scottish textiles?

FW: I did indeed. The colours are a cry back to a wolf’s coat with a shot of red through there for other parts of my environmental studies with Red Deer and Scot’s Pine (which has a lovely red hue to the bark). It matches the wolf tattoo on my forearm and is something that has held my imagination since I was younger and began my studies. Prickly Thistle helped design and weave the tartans and a big part of their message is the permanence of traditional Scottish industry vs. fast fashion and plastic-based materials. I know a lot of people growing up inherited a kilt, it has a lifespan beyond that, unlike most clothes and I really put mine through its paces.

Finlay what would you tell someone, regardless of their age, who wants to try yoga? Also, can you tell us about some of the ongoing benefits yoga has given you and how does it make you feel to be taking yoga to such a new level across the world?

FW: A lot of people have tried yoga, one of the things we try to let people know is that there are many styles, systems, methodologies and personalities out there. Depending on what you need (and you may not even know) it is worth shopping around a little. One teacher’s interpretation of gentle may be vastly different to another’s. It is useful to find a teacher that is knowledgeable and experienced, especially if you are navigating any injuries but it is best to check with a physical therapist about the best route for that.

For me, yoga makes me less reactive. I have a core that feels steady in the face of challenges. Breath work and endurance have helped me on so many occasions it doesn’t need mentioning! It is this that I hope brings people to my classes, the desire to explore what they can do rather than adding to a list what they can’t do.

And finally, Finlay in your book and your videos you get to travel across Scotland and show off its beauty to many. How does Scotland’s natural settings compliment yoga and do you have a favourite part of the country to visit when not rolling out the yoga mat?

FW: I love practicing all over but if it’s a peat bog and soaking, I am usually miserable!  Give me dry and grippy rock and we are on to a winner. It’s the fresh air, the feeling of life in with each breath. Whenever I am away travelling it is something I look forward to on my return.

Wild Kilted Yoga: Flow and Feel Free by Finlay Wilson is available now. For more information or to keep up with Finlay see: www.finlay-wilson.com