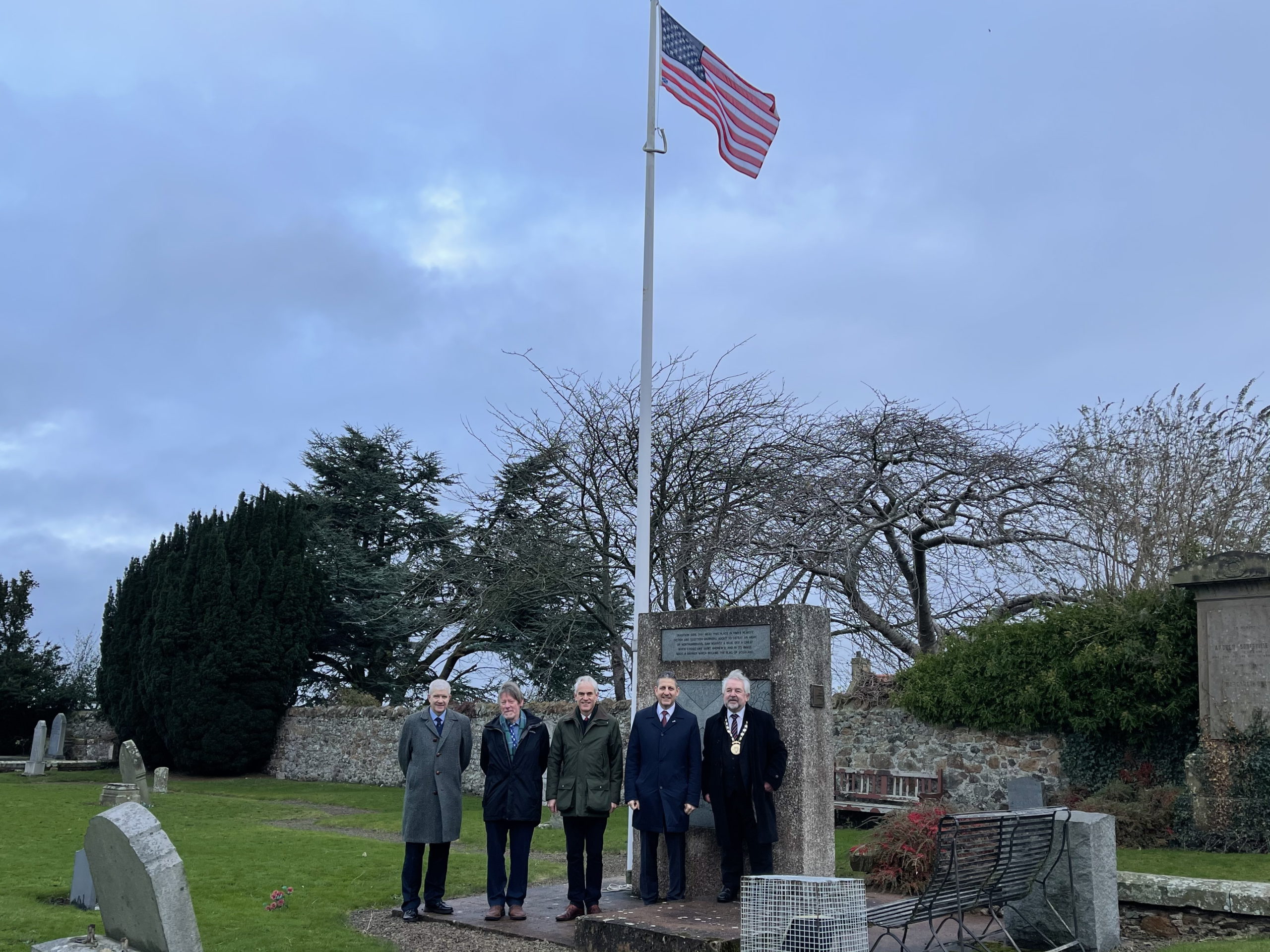 Friendship between Scotland and the USA celebrated on St Andrew’s Day.

The US Consul General visited the birthplace of Scotland’s flag to celebrate the close ties between Scotland and the USA. Jack Hillmeyer the US Consul General in Edinburgh visited Athelstaneford in East Lothian where the US flag was flown at the Saltire Memorial. The Saltire flies from the memorial in the kirkyard of Athelstaneford Parrish Church all year round, flood lit at night. The Saltire is rarely lowered, flying another national flag is a rare honour, particularly on Saint Andrew’s Day.

Commenting Mr Hillmeyer said: “It was a great honour to be in Athelstaneford on Saint Andrew’s Day and it was a tremendous honour to have the Stars and Stripes flown at the Saltire Memorial, it shows the depth of friendship of our two nations especially on this beautiful St Andrew’s Day.”

The birthplace of Scotland’s National flag

The Scottish Flag Trust is a volunteer run charity and donations help to cover annual running costs and maintenance. Donations are essential to keep the memorial and flag heritage centre free to visit, so the story of Scotland’s flag can continue to be told. David Williamson, Chair of the Scottish Flag Trust said: “We were delighted to host the US Consul General on St Andrew’s Day and fly the US flag at the Saltire Memorial to celebrate the close links between Scotland and the USA. The Scottish Flag Trust has recently launched an international fundraising drive to restore and renew the birthplace of the Saltire with interest already shown from Saltire and Clan Societies in the USA. Today we are launching a new initiative to allow everyone to have the Saltire flown in their honour at the birthplace of our flag. People can go online to Saltire.scot and sponsor the flag for a day for themselves or for someone special”

Provost of East Lothian Cllr John McMillan said: “It was an honour to welcome the Consul General to East Lothian and to the birthplace of Scotland’s National flag in the village of Athelstaneford. With our historic links, and so many visitors from USA welcomed annually to our famous golf clubs along our coastline, we feel we have so many special points of interest for our USA visitors who will love to learn about the home of John Muir in Dunbar and spend time in our wonderful county.”

Tradition has it that the Saltire, Scotland’s National flag, originated in a battle fought in East Lothian, near the village of Athelstaneford in the Dark Ages. Today the flag flies proudly all year round from the floodlit Saltire Memorial in Athelstaneford Parish Church to celebrate this special connection. The Flag Heritage Centre at the back of the churchyard tells the story of the Battle of Athelstaneford.