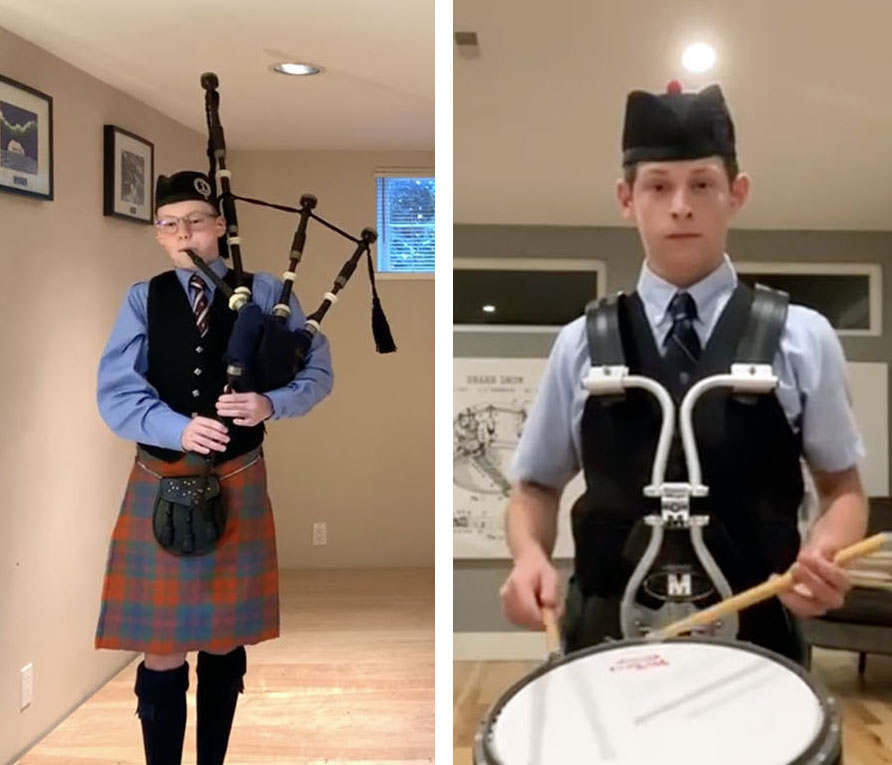 Fifteen pipers were invited to participate in the contest: eleven from six US states and four from Canada. Six drummers were invited to compete in the contest: five from the US, and one from Scotland. Competitors submitted one video for each of two events in their discipline: an MSR and Piobaireachd for pipers, and an MSR and Hornpipe & Jig for snare drummers. The panel of judges was truly international this year, with judges from the United States, Scotland, Ireland, Canada and Australia.

The Overall piping winner was Cameron Bonar of Surrey, British Columbia, Canada, who took first place in both the MSR and the Piobaireachd. As Overall Winner he won a set of blackwood Duncan MacRae Bagpipes donated by McCallum Bagpipes, and the Ralph and Patricia Murray award for a full scholarship at the 2022 Balmoral Summer session. Cameron also won the E.W. Littlefield, Jr.

Award for the MSR event and a Piper’s Choice set of smallpipes donated by Scott’s Highland Services of London, Ontario and the Balmoral Award for the Piobaireachd event and five tutorial bundles from Murray Henderson Piobaireachd Studio. Prizes for 2nd to 5th place pipers included a handcrafted blackwood “MAC 1” pipe chanter donated by MacLellan Bagpipes, an Antique Thistle Faux Seal Sporran donated by Celtic Croft, a Gift Certificate for pipetunes.ca donated by McGillivray Piping Inc.,  and additional prizes. The 2nd to 5th place Overall Winners receive tuition for one week at the 2022 Balmoral School summer session.

The Overall drumming winner, Sebastien Arguelles, from Houston, Texas, USA, also took first place in both drumming contests. He was awarded an Axial “Silver Sparkle” Snare Drum donated by Henderson Imports of Traverse City, Michigan, the David Peet Memorial Award for the Overall Winner, and the Henry Matthews Scholarship for one week’s full scholarship at the 2022 Balmoral Summer session. Sebastian also won the St. Andrew’s Society of Pittsburgh Award for his first in the MSR and The Pittsburgh Firefighters Memorial Pipe Band Award his first in the Hornpipe & Jig. The 2nd to 6th place Overall Winners receive tuition for one week at the 2022 Balmoral School summer session.

After the Saturday contests, there was a Live via Zoom awards ceremony, attended by the competitors, their families, our judges and staff, and Classic supporters. After a break, they were treated to an outstanding concert with Scottish fiddle virtuoso Alasdair Fraser, and renowned cellist, Natalie Haas. Calvary United Methodist Church with its amazing collection of Tiffany stained glass windows, surrounded the audience with special ambiance for the in-person event, which was also live-streamed.

For more information on the Balmoral Classic and to see the full results see: www.balmoralschoolofpiping.org