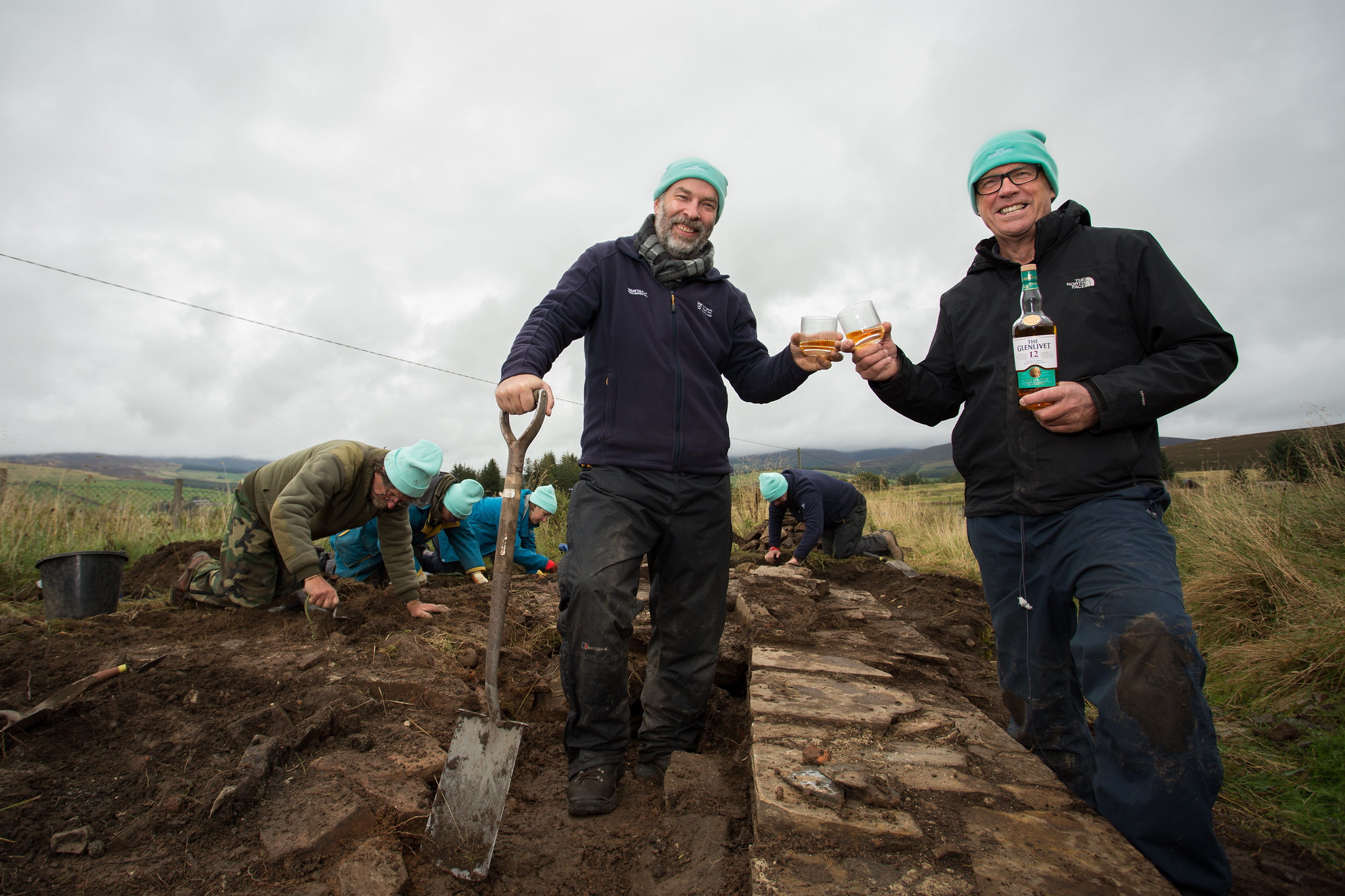 National Trust for Scotland archaeologists have started uncovering the secrets of Scotland’s whisky history in an excavation at the old site of The Glenlivet Distillery, one of Scotland’s first whisky distilleries to become licensed after the 1823 Excise Act.  The dig at the site of Upper Drumin, in Speyside, which is one kilometre upslope from the modern distillery has so far uncovered the floor of the old site, which dates from 1824. This is where The Glenlivet’s founder, George Smith, risked life and liberty to produce his single malt whisky. He became the first illicit producer to get his licence. Fragments of bottle glass and ceramics believed to have been involved in whisky production were also found.

Investigations which began in October are being carried out as part of the Pioneering Spirit project – a partnership between conservation charity the National Trust for Scotland and The Glenlivet, the original Speyside single malt whisky, to uncover and share the history and impact that whisky production has had on Scotland’s cultural heritage and our modern way of life. The old site was originally a farm, converted to whisky production site by George Smith in response to the 1823 Excise Act, which made licenced production of whisky possible. Before then, Smith, like many others in communities across Scotland – including Speyside and the Highlands – made the spirit illegally, smuggling their produce to customers. Apart from the remains of two of the old mill dams, nothing survives above ground of the distillery. The site, which is on Crown Estate Scotland land, is marked by an inscribed monument marking its important role in whisky history.

Derek Alexander, the National Trust for Scotland’s Head of Archaeology, has a long association with the location and conducted a survey of the distillery remains in the 1990s. He said:  “Returning to this place after nearly 25 years to finally uncover the remains of this special place is really inspiring. Brushing dirt from the flagstones where George Smith, one of the lead figures of Scotland’s whisky industry, stood was incredible.  What’s really interesting is that this is where the illicit production of whisky, which is what we find evidence of on our National Trust for Scotland sites, and the transition towards larger scale industrial production meet; a formative part of the whisky industry becoming one of Scotland’s biggest and most successful. It’s such a powerful part of our national story and identity, which is loved and recognised, at home and around the globe.”

Alan Winchester, The Glenlivet’s Master Distiller said:  “I have always been fascinated by The Glenlivet’s rich history, so to be entering the second year of our partnership with the National Trust for Scotland is a delight. The majority of my career has been spent continuing the legacy of our founder George Smith, so it’s really interesting to have the opportunity to uncover even more secrets about our illicit past and tell new stories about the role Scotch has played in defining Scottish culture.”

Volunteers including staff from The Glenlivet and members of the local community took part in the dig, with the support of the Crown Estate Scotland Ranger Service, as part of the Highland Archaeology Festival.

-Commenced in August 2020, Pioneering Spirit is a 3-year partnership between the National Trust for Scotland, the charity that for 90 years has protected Scotland’s most loved places and The Glenlivet, the original Speyside single malt whisky, which aims to uncover and share the history and impact of whisky production across Scotland.

-The project is the first of its kind and will see archaeologists carry out field work across the Highlands to reveal the impact of whisky distilling on Scottish history.

-Created by George Smith in 1824, The Glenlivet is the Original Speyside Single Malt, renowned for its heritage as a visionary within the single malt category.

-The Glenlivet has contributed the biggest volume growth of the single malt category worldwide, adding more than any other single malt whisky brand over the past five years.

– The Glenlivet is dedicated to continuing this legacy. Standout initiatives include the release of The Glenlivet Code, a mystery single malt, and the creation of The Glenlivet Founder’s Reserve, a great representation of the distillery’s signature style.