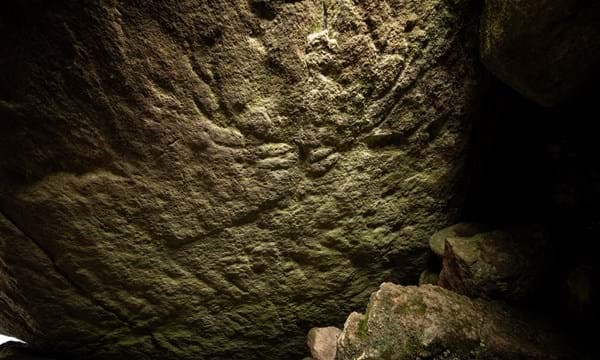 Prehistoric animal carvings, thought to be between 4,000 and 5,000-years-old, have been discovered for the first time in Scotland hidden inside Dunchraigaig Cairn in Kilmartin Glen, Historic Environment Scotland (HES) has announced. The carvings, thought to date to the Neolithic or Early Bronze Age, include depictions of two male red deer, which are considered to have been the largest deer species in Scotland during this time. Full-grown antlers can be seen on both animals, while anatomical detail including a short tail can be seen on one. Three other quadrupeds are also visible, two of which are thought to be juvenile deer. Valuable as sources of meat, hides, and with bones and antlers used for a variety of tools, deer would have been very important to local communities during the Neolithic and Early Bronze Age. These are the earliest known animal carvings in Scotland, and the first clear examples of deer carvings from the Neolithic to Early Bronze Age in the whole of the UK.

The carvings were discovered by chance by Hamish Fenton, who has a background in archaeology, while visiting Kilmartin Glen. The carvings are located inside Dunchraigaig Cairn on the capstone of an Early Bronze Age burial cist. Kilmartin Glen has one of the most important concentration of Neolithic and Bronze Age remains in mainland Scotland, including some of the finest cup and ring markings in the country. This is the first time that animal carvings of this date have been discovered in an area with cup and ring markings in the UK. There are over 3,000 prehistoric carved rocks in Scotland. The vast majority are cup and ring markings which are abstract motifs created by striking the rock surface with a stone tool, such as a large river-washed pebble. Most commonly, cup and ring markings are composed of a central cup mark surrounded by pecked concentric circles. While many of these mysterious carvings can still be seen in the open landscape today, we know little about how they were used, or what purpose they served.

Dr Tertia Barnett, Principal Investigator for Scotland’s Rock Art Project at HES, said: “It was previously thought that prehistoric animal carvings of this date didn’t exist in Scotland, although they are known in parts of Europe, so it is very exciting that they have now been discovered here for the first time in the historic Kilmartin Glen. This extremely rare discovery completely changes the assumption that prehistoric rock art in Britain was mainly geometric and non-figurative. While there are a few prehistoric carvings of deer in the UK, the only other ones created in the Early Bronze Age are very schematic. It is remarkable that these carvings in Dunchraigaig Cairn show such great anatomical detail and there is no doubt about which animal species they represent. This also tells us that the local communities were carving animals as well as cup and ring motifs which is in keeping with what we know of other Neolithic and Bronze Age societies, particularly in Scandinavia and Iberia. Until now, we did not know of any area in Britain with both types of carvings, which poses questions about the relationship between them and their significance to the people that created them.”

Following Hamish’s discovery, experts from Scotland’s Rock Art Project examined the carvings to confirm their authenticity. This included utilizing innovative technology in their analysis. A structured light scan was carried out by HES digital documentation experts to create an accurate and detailed 3D model with photographic texture, and various visualisation techniques were then applied to the model in order to reveal more details of the carvings than would have been visible to the naked eye.

Helping to reshape our understanding of the past

Dr Barnett added: “Digital techniques are being used more and more frequently to create precise 3D models of rock art and reveal details that were previously unknown to us, or that we only suspected. This also means that we are able to make rock art in Scotland more accessible than ever before. As part of Scotland’s Rock Art Project, we have created over 1,000 3D models of prehistoric rock art which are now available online for people to explore. Digital technology is becoming increasingly important for archaeology, and particularly for rock art, and is a key to unlocking the hidden secrets of our past. This incredible discovery in Dunchraigaig Cairn makes us wonder if other animal carvings previously unknown to the UK are hidden in unexpected places in our ancient landscapes, waiting to be uncovered in the future.”

The Cairn, which is a Property in Care of HES, is 30m wide and contained three stone burial chambers, or cists. The third cist, where the carvings are located, was dug directly into the ground, lined with drystone cobbled walls and capped with an unusually large stone over 3.5m long. The remains of up to 10 individuals, some cremated, were also discovered here when the site was initially excavated in the 1860s, as well as artefacts including a whetstone, a greenstone axe and a flint knife.

On discovering the carvings, Hamish Fenton said: “I was passing Dunchraigaig Cairn at dusk when I noticed the burial chamber in the side of the cairn and decided to slide inside with my torch. As I shone the torch around, I noticed a pattern on the underside of the roof slab which didn’t appear to be natural markings in the rock. As I shone the light around further, I could see that I was looking at a deer stag upside down, and as I continued looking around, more animals appeared on the rock. This was a completely amazing and unexpected find and, to me, discoveries like this are the real treasure of archaeology, helping to reshape our understanding of the past.”

The cairn is currently closed while HES carries out further evaluation and puts measures in place to protect the extremely rare, and delicate, ancient carvings. Visitors are encouraged to explore the carvings via 3D models which have been created.

You can explore 3D models of the cairn and its carvings at: https://sketchfab.com/HistoricEnvironmentScotland