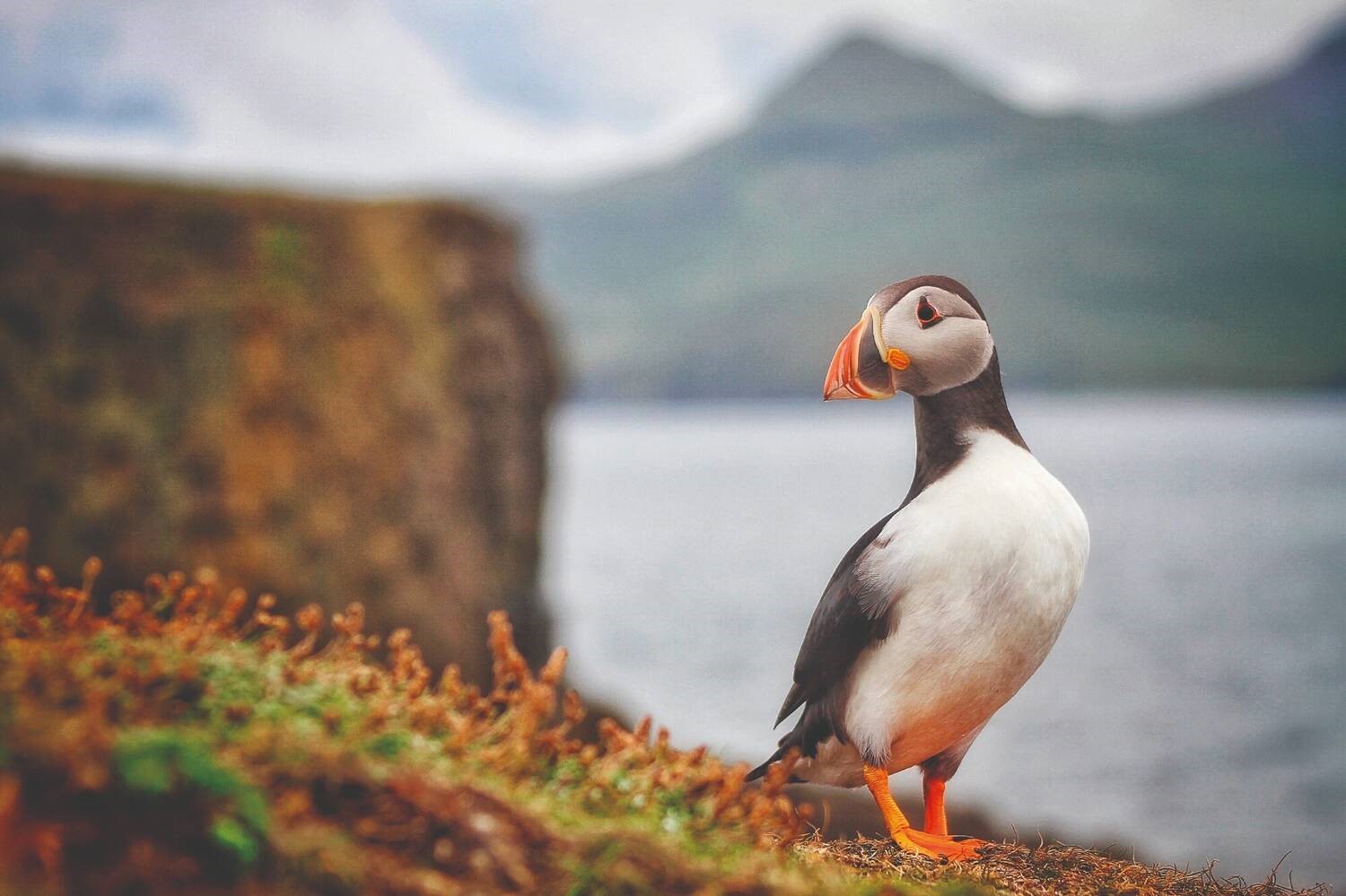 Standing on the cliffs of the island of Canna, watching hundreds of seabirds swirl and freewheel through the skies, is an assault on the senses. “It’s an incredible thing to watch”, agrees Jeff Waddell, the National Trust for Scotland’s Senior Natural Heritage Advisor.,“The birds are nesting on these beautiful, inaccessible cliffs, with waves crashing in at the bottom. It feels so wild and you’re just surrounded by nature, in every sense.”

And then there are the birds themselves: the puffin with its iconic multi­coloured bill and the beautiful snowy-feathered kittiwake. Here, too, you’ll find guillemots, shearwaters and more. Together with neighbouring Sanday, this island – gifted by John Lorne Campbell and his wife Margaret Fay Shaw to the Trust in 1981 – is a designated Site of Special Scientific Interest and has Special Protection Area status. These craggy coastlines support some 11,000 seabirds, who build their nests and raise their young on the cliffs, sea caves and offshore stacks. Their numbers have declined hugely in the last two decades – it’s estimated that there were 21,000 birds here in the late 1990s, for instance. Without the efforts of the Trust, however, things could have been a lot worse.

In fact, some of the seabird populations here are in relatively fine fettle. Since a programme to eradicate rats from the island was successfully completed in 2008 (an operation that cost half a million pounds and saw more than 4,200 traps laid), the colony of shags has doubled from its low point in 2011 to 444 pairs in 2019. But, as is happening across the globe, many seabird populations are facing difficult times as the climate and biodiversity crisis bites. “Most of our seabirds are declining. The vast majority are in serious trouble due to the effects of climate change”, says Jeff.

As the oceans warm, the sandeels that many seabirds feed on move north to colder waters. This forces the birds to change to different prey, which is often less ideal for them. They also often have to use more energy foraging, reducing their body mass and breeding condition. Chicks are less well fed and fewer make it to fledging.

“Seabirds are like a barometer for the health of our seas. Some of the seabird species are potentially threatened with local extinction and, if warming continues, extinction on a wider scale”, Jeff explains.  That means monitoring seabird numbers is more crucial than ever.

Bob Swann, a volunteer who leads a surveying team from the Highland Ringing Group, agrees. Bob first got involved in 1971 and has been on hand to record the highs and lows of the bird populations here ever since. The work is complex and demands experience, as he explains: “We check all the sites on the island every year and literally count how many there are. Some, such as the puffins, are quite tricky, and for those we have study plots where we can just count the number in a particular area. We also have plots where we try to see how many chicks the birds are producing in a year. And we ring a lot of birds. Initially, this was just to work out where they were going when they left Canna, but increasingly it’s being used to try to work out their survival rates, how long they’re living for. Last year we caught a guillemot that was 41 years old – a UK record. We collect information about what the birds are eating and increasingly we’re attaching high-tech loggers such as geolocators.” From this data the team are able to understand some more surprising trends. Kittiwakes have seen massive declines in Shetland and Orkney but are doing well on Canna, with the highest numbers on record counted in 2019.

“I think in the North Sea they are very much hooked on sandeels’, notes Bob. ‘But in the west coast they’ll take a wider range of fish – young sprats or whiting, say. Here they switch and as a result they do better. We’ve been taking samples from them every year, so we know what they’re feeding on. We have also reached record puffin numbers, but that is almost certainly down to getting rid of the rats. Before, the puffins were very much confined to the offshore stacks where the rats couldn’t get at them. But now the puffin numbers on the north side of the island are just going up and up – they have probably doubled.”

He admits that he fears for the future of many of these birds though, remembering years of sharp decline between 2005 and 2010, when a series of mild winters led to warming seas and low fish stocks.  Bob said:  “I’ll never forget going down the north side on one occasion during that period and thinking: ‘There’s something really strange here.’ I couldn’t work out what it was until I got to the lip of the cliff and I realised it was silent. When I looked over, there were no birds – they had all failed. It was very emotional. Canna is a key monitoring site but it means if something is bad on Canna, the whole of the west coast of Scotland and beyond is affected. When something like that happens, you worry that it’s going to be the end of these great seabird concentrations.”

Numbers are up but haven’t fully recovered. “I don’t think we’ll ever get back to the peak numbers we once had. But it would be good if things could just be stable at the level we’ve reached, so these birds will be around for future generations to marvel at.”, says Bob.

Committed to doing all they can to ensure this happens are the Trust’s senior rangers, Michael Butler and Gillian Gibson. They believe Canna is a ‘magical’ place, not just to see seabirds but also to experience its rich biodiversity: you’ll find everything here from frog orchids and butterflies to seals, minke whales and eagles, both golden and white-tailed. For Michael, a visit to the puffin stack is the real highlight of any visit to the island. He said: “They do a murmuration like starlings do, which is incredible to see. There are hundreds of puffins swirling around the stack.” Below the puffins on a basalt shelf are fulmars, razorbills, guillemots and shags, with kittiwakes also on nearby cliffs.  Michael continued: “It’s amazing to see so much life on one rock’, he adds. ‘Visitors watch open-mouthed.”

In normal times, helping people to connect with that magic is a key part of the ranger’s work. The aim is to help visitors to understand the importance of conserving our coasts by falling in love with these seabirds. “We came here because we really wanted to be part of connecting visitors to the wildlife. Canna truly is a hidden gem. Considering it’s so small, it has an awful lot to give. It shows there is always something bigger than us humans – that we are just a part of it. And that rather than fighting nature, we should be working with it, for everyone’s sake” Michael says.