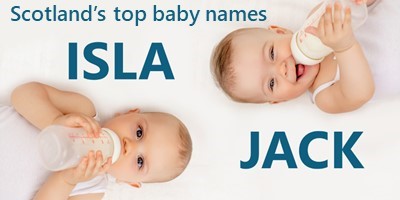 Isla overtakes Olivia as the top name for baby girls for the first time, with Olivia taking the second spot and Emily now being the third most popular name, according to the full lists of 2020 baby names published by National Records of Scotland (NRS). Jack remains the most popular boy’s name, holding on to the top spot for the 13th consecutive year. Noah is now the second most popular boy’s name, having jumped from 7th place last year, and meanwhile James stays in 3rd place. The girl’s name Maeve made a massive leap of 130 places from last year, up to 86th place, and Ayda, the second highest climber in the girls’ top 100 list, rose 63 places to the 91st spot. The biggest increases in the top 100  boys’ list were Roman, which jumped up 68 places to 33rd,  and Finley, which rose 48 places to 88th. 2020 saw the highest ever level of different names, a trend that has continued for some time now.

Of the 23,968 girls registered in Scotland last year, there were 4,347 different names, whilst more boys shared the same name. Of the 22,387 boys registered, there were only 3,375 different names. Children nowadays are much less likely to share a name with classmates than their grandparents were.