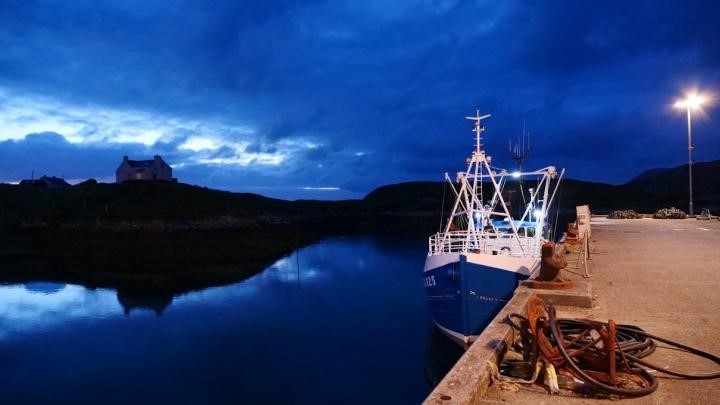 Archive recordings collected by Edinburgh researchers are at the heart of a new film that pays homage to a language and culture in peril. A wealth of material recorded by ethnographers in the 1950s and 60s underpins this remarkable work, which is the first feature-length cinematic documentary in Scottish Gaelic. Iorram (Boat Song) is a stirring portrait of the changing fishing communities of the Outer Hebrides that fuses archive voices and songs with images of island life today. Director Alastair Cole accessed clips from the School of Scottish Studies archive while making the film, which premiered at Glasgow Film Festival to widespread acclaim.

The University of Edinburgh researchers who travelled the Hebrides with newly available portable recording devices captured the sounds of a culture that was dying out. Playing catch-up with centuries of tradition, they saved stories, songs and speech that would otherwise have been lost. Over the past decade, these precious clips have been painstakingly digitised. Now this epic, groundbreaking work runs as a continuing thread through Iorram, which saw Cole spend three years filming around the islands while also scouring 30,000 archive entries. Many of those recordings were catalogued by the Tobar an Dualchais/Kist o Riches Project – a unique online record of Scotland’s rich oral heritage.

Iorra’s makers combed the archive for voices that were vivid, dramatic and emotional – sometimes even playful – to bring to life the intimate, perilous relationship between fishing crews and the stormy Atlantic.

In Iorram, these voices are translated with English subtitles for the first time, so that they can be understood, enjoyed and appreciated by non-Gaelic audiences. Present-day inhabitants of the islands are observed on land and at sea, while the ghostly voices of their forebears tell stories and sing songs about life at the mercy of the waves.

The film’s co-producer Magnus Course, a senior lecturer in social anthropology at Edinburgh, says those voices have an added poignancy as the Gaelic fishing community faces the grave challenges posed by Brexit, globalisation and climate change. The project stemmed from the lecturer’s study of the living, breathing relationship between the Gaelic language and fishing. Some 75 per cent of fisherman in the Western Isles speak the language, compared with 50 per cent of the population. The inshore fishing industry is one of the few working environments in Scotland where Gaelic is habitually used.

Dr Course says the film is also a love song to a language and culture at risk of extinction. Once spoken across most of Scotland, Gaelic has shrunk to just 11,000 habitual speakers, Yet, at the same time, interest in the lyrical beauty and cultural value of Scottish Gaelic is booming, with Gaelic schools flourishing in Glasgow and Edinburgh, and more than 560,000 registered learners worldwide. The makers of Iorram hope the film will bring something of that beauty and power to a wider audience, and show that losing this ancient language and culture will impoverish us all. The film features an original score by award-winning fiddle player and composer Aidan O’Rourke of the popular folk trio, Lau, Having premiered at the Festival on Sunday 28 February, Iorram will now go on virtual UK theatrical release.