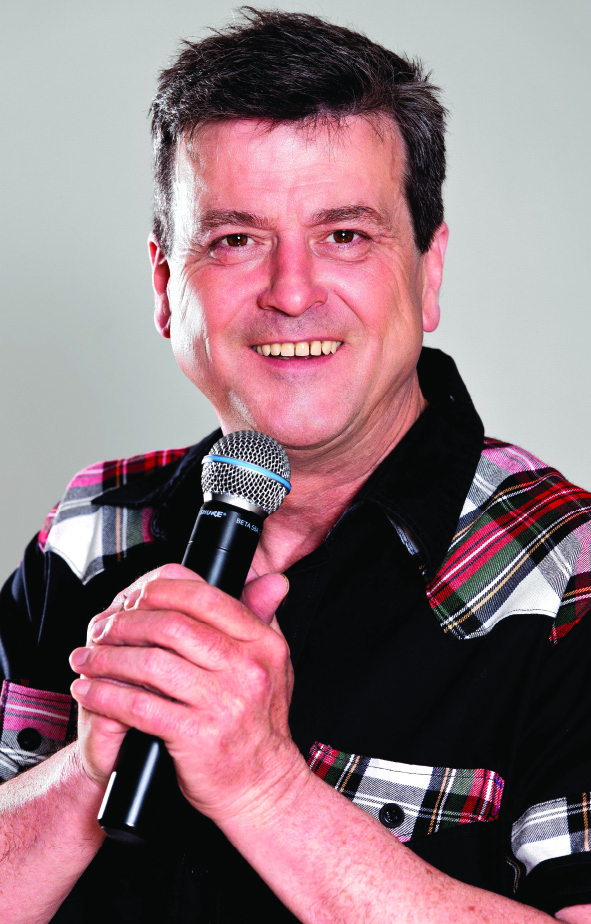 The Scottish Banner spoke to Les McKeown, who sadly passed away this week, in 2018. As a tribute to Les we are featuring some of that interview with the Bay City Rollers icon. RIP Les.

In the 1970’s the Bay City Rollers were five young lads from Edinburgh who were on the brink of global superstardom. The band became the most successful chart act in the UK, selling tens of millions of albums, had a unique look and sound, and they became the biggest global band since the Beatles. Front man Les McKeown spoke to the Scottish Banner on what it was like to reach such super stardom, Rollermania and just how it felt to turn the whole world tartan.

SB: Les thanks for taking the time to speak to the Scottish Banner. Can you start by telling us about how great it is for you to still be able to play Bay City Rollers music today and how it feels to see the Rollers on such a great roll once more?
LM: We love keeping the music of the Bay City Rollers alive for the older fans and of course reaching new fans we play to on the road. Just to clarify The Bay City Rollers are not the band I tour with, in fact we are called Les McKeown’s legendary Bay City Rollers, which is the band I have been with for over 25 years. I have actually been touring all over the world, each year I have been to places like Canada, Japan, UK, Europe, New Zealand and Australia.

SB: The band has its origins in working class Edinburgh. Can you briefly tell us how the band went from the gigs in the Scottish capital to becoming international tartan teen sensations and selling tens of millions of albums worldwide?
LM: Yeah, I don’t know how that happened exactly but the band started in 1967 and at that time were called The Saxons. In 1971 the band a hit in the UK with a song called Keep on Dancing, which made it into the top 10 charts. Then there was quite a bit of disappointment after that with singles that were not making the charts. The previous singer left the band and in November 1973 I was already in a band which were very popular around Edinburgh and across Scotland. The management of the Rollers were looking for a young popular singer at that time and I was asked to join the band and within 3 months we were at the top of the charts again in the UK and this started the “tartan typhoon” that soon began with what became known as Rollermania.

SB: Les we understand a map of the USA helped create the band’s unique name, can you tell us how the name the Bay City Rollers came about?
LM: The guys wanted to have a different name for the band and had this cute idea of trying to find an American sounding name for the band and the idea of the Rollers was born. What happened was they literally threw some darts at a map of America and one of the darts landed on Bay City in Michigan. So, they added Bay City to what they already had and became the Bay City Rollers.

SB: You have called your fans family who have grown up together, can you tell us more about the family connection you feel with your fans?
LM: That’s right, and there is a lot of that today with social media. Through live messaging or Periscope or Facebook live, I can have a chat with the fans and connect with them in real time. I am active in a social media sort of way and love reaching out to fans. Of course, you also get used to seeing fans over the years at the live shows and at times I catch up with them for dinner or have a catch-up during intermission at one of our gigs. Some fans are able to maintain a friendship connection like that and some are still amazingly besotted by my mere presence if you know what I mean, they can still be a bit weak at the knees!

SB: The Bay City Rollers are still today considered as one of Scotland’s greatest musical exports, with a look and sound like no one else, the band also became a “boy band” well before the term existed. How did you handle such a great level of success at such a young age?
LM: We were so young and it was all such a big adventure for us. We were happy to be working so hard and travelling all over the world. It really was so unbelievable and nothing really could prepare us for the level of success and fame that was about to hit us, it truly was phenomenal.
You could say that some kind of reaction was expected if we were successful. I had been to David Bowie and Led Zeppelin concerts and I could see how audiences could react to famous people. When we got famous we expected some reaction, but the reaction that happened to us was way over the top and more like a super reaction. We enjoyed and it was great while it lasted, but of course there was a downside to that after it finished. For me I went on to record albums and continued to write music after the Bay City Rollers and for quite some time it never really stopped for me.
Until 1985 when I moved from London back to Edinburgh and got married and had a child and thought of retirement. Though the money from the record company started to slow so I came up with some new projects as I knew I had to start working again and began to form my own Bay City Rollers again and go out on the road and reproduce the band’s song, songs that I had made a hit with.  I have been building on that ever since and we even went on to do a musical called Rollermania which was successful in the theatres around the UK.
In 1999 we did a Millennium concert at Edinburgh Castle for Hogmanay with all the original band excluding the drummer. It was Eric, Alan, Nobby and myself and the concert was to launch a Rollers get together reunion but unfortunately Alan fell ill and the tour was cancelled but we did manage to do that Edinburgh show which was a huge success.

SB: The energy and excitement of performing all the Rollermania hits must be quite a thrill. How does it make you feel to relive this excitement with fans old and new?
LM: It is even more rewarding now as we take such care to make sure the music sounds good. The BCR have so many hit songs and though we change the set list all the big hits remain in place.  We may do some numbers acoustically or even get fans up on stage to sing with us, but we keep true to the music. It is what people expect and what we love to do.

SB: Fans old and new will love the classic hits of the Bay City Rollers, however you also want to incorporate some “tartan-mania” in your shows. Can you tell us more and how important it has been for the band to include the fabric of Scotland in their identity?
LM: Well it’s in my bones isn’t it? Tartan is part of every Scotsman’s history and we are very proud of it.  It was a big part of the Bay City Roller’s image and was very iconic for what we wore. We had it in our shirts and tartan down the side of our trousers and we wore lots of tartan scarves. When you think of Bay City Rollers you think tartan and you think Scotland. We keep that going and I think that is a really good thing.

SB: Les the music of the Bay City Rollers takes audiences on a unique voyage back to a time when they were the soundtrack for a generation. How does that make you feel to be able to connect to fans so many all these years later whilst at the same introducing a whole new generation to your hits?
LM: There are a lot of new people coming to our shows to see what all the fuss was about. Of course peoples sons and daughters have also grown up to their Mum (and Dad!) playing our music in the car or at home. So the kids know all the songs as well. The male of the species who would never have come to our shows back in the day, are now coming in droves wanting to also hear those songs of their childhood and have fun.

SB: What advice would the Les McKeown of today give the teenage Les starting out with the Rollers in Edinburgh all those years ago?
LM: Keep on doing what you are doing! There have been lots of some extreme highs and sadly some lows, but all in all it’s been a great ride for me. I also never could have known all the influences we have had on people such as bands like The Ramones writers of films, Judy Murray (mother to tennis greats Andy and Jamie Murray) she comes along to our shows. It surprises me to meet so many people who you have had such an impact on their life.