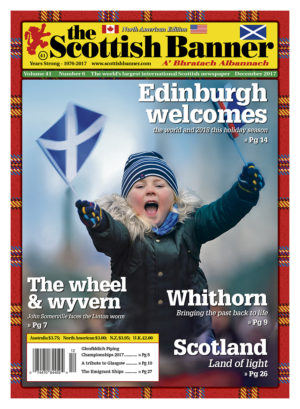 As December approaches we are reminded of one of the most special times of the year when we can all pause and celebrate Christmas and Hogmanay with our loved ones. The month is a busy one with social events for many and catching up with friends, family and ourselves.

I remember as a child the excitement of putting up decorations and seeing presents appear under the tree (especially if they had my name on them!) We had a ritual in our house where we were allowed to open one gift before bed on Christmas Eve. It usually was a prelude of things to come the next day and consisted of lots of wrapping paper ripped apart and across the floor with everyone checking out what the other received.

Christmas, however, was not always such a special time in Scotland. The Protestant Reformation banned Christmas in Scotland for 400 years and it was simply just another day for everyday Scots and amazingly Christmas Day didn’t become a public holiday in Scotland until 1958, with Boxing Day not a holiday until 1974.

Perhaps this is why the Scots have always been known for their Hogmanay celebration which have been an important ancient Gaelic winter celebration for centuries and today attracts people from all over the world to the country.

Scots not only know how to throw a party (and welcome the world) this month, many will also keep up with some rather unique Scottish traditions that are carried out across the country.
The custom of First-footing describes the arrival of your first guest on New Year’s Day. Tradition dictates a tall, dark male bearing various gifts is said to bring good luck and prosperity to a home; whilst fair-haired males and females are thought to be unlucky.

The Kirkwall Ba’ is a mass-football game played out in the streets of Kirkwall in Orkney every Christmas Day and New Year’s Day. The game pits two rival groups (the Uppies and Doonies, the names being derived from Up-the-Gates and Doon-the-Gates), against each other in a battle to secure a goal and win the game. Dating back to the mid-17th century the Kirkwall Ba’ is still today one of the most popular parts of the Orkney holiday calendar.

Maybe not as exciting for some is the tradition of redding where a thorough housecleaning or “redding,” removal of the ashes from the fireplace, and repayment of all debts — all of which must be done before “the bells” at midnight on December 31st. Who doesn’t like to start the year off in a nice clean hoose?

The small town of Burghead in Moray gets a bit greedy over their Hogmanay celebrations with two celebrations to enjoy. The Burning of the Clavie is a fire festival unique to Burghead, which greets in the New Year. The Pagan festival dates back to at least the 1750s and takes place both on December 31st and also again on January 11th. The significance of the 11th January dates back to the 1750’s, when the Julian calendar was reformed in Britain. The new Gregorian calendar was introduced. People rioted, demanding back their 11 days – but not in Burghead. The clavie, which is a half-cask filled with wood shavings and tar, is set alight. Getting of a piece of the clavie is said to bring good luck for the coming year.

Scotland’s historic capital is again rolling out the red carpet for kids of all ages this festive season with a huge range of events to cater to all tastes, highlighting with the spectacular fireworks display over Edinburgh Castle. The city will again blend a mix of new and old customs for the tens of thousands of revellers which showcases Scottish hospitality and tradition.

As winter takes hold this month the days become shorter and skies much darker. Scotland is now a top stargazing nation and parts of the country are some of the darkest in Europe. For those who want a real out of this world light show there are few places that can match the celestial displays of bright stars and Northern Lights.
The reconstruction of an Iron Age roundhouse in Dumfries was recently honoured and the ancient settlement of Whithorn is being recreated for future generations to understand Scotland’s Iron Age past. Many crafts people have worked tirelessly to preserve this part of Scotland’s rich heritage.

Scottish folklore is full of interesting tales and this month we look at the story of the last dragon to be killed in Scotland. Many may not be familiar with the Linton worm in the Scottish Borders, however Sir Walter Scott was. Just like the much more famous Loch Ness monster, fact or fiction, the tale is incredible because just what if it was true…

A festive time in a very festive nation

Scotland offers a unique mix of ancient tradition mixed with a modern flair. This month is a festive time in a very festive nation, however wherever you may be spending your Christmas or seeing in 2018 all of us at the Scottish Banner wish you and yours a wonderful holiday season and may 2018 be a year of health and happiness.

Have you got a favourite Christmas or Hogmanay tradition or perhaps been lucky enough to visit Scotland for during the holiday season? Share your story with us by email, post or at www.scottishbanner.com/contact-us

How are you celebrating St Andrew’s Day? Share your story with us by email, post or at www.scottishbanner.com/contact-us